UPDATE ON THE RHINO POACHING CRISIS – FEBRUARY 2016
South Africa Reports a Small Decrease in Rhino Poaching for 2015 – Johannesburg, South Africa, 21st January 2016—South Africa announced the official number of Rhinos illegally killed in the country during 2015. The figure of 1,175 represents a slight drop on the 1,215 record total in 2014, but overall Rhino poaching figures for Africa total a record high for the continent. 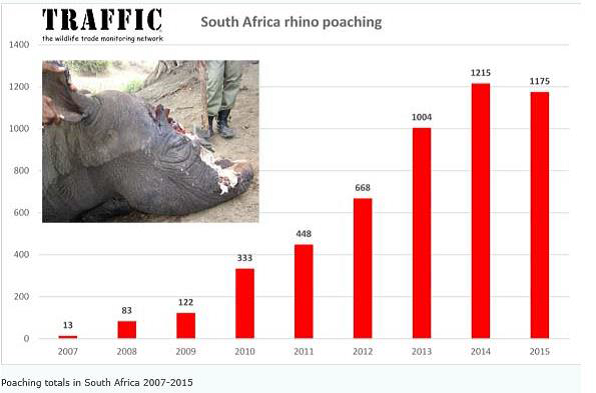 “While a slight decrease in Rhino poaching in South Africa was apparent in 2015, and perhaps the authorities are having some impact on the ground, these numbers are hardly cause for celebration or complacency,” said Sabri Zain, TRAFFIC’s Director of Policy. “The figures remain unacceptably high and continent-wide the scale of the Rhino poaching crisis is spreading.” The 2015 decrease in South Africa has been more than offset by significant increases in neighbouring Zimbabwe, where Rhino poaching rose from 12 in 2014 to a widely reported total of “at least 50” last year, while losses in Namibia also rose sharply from 24 in 2014 to 80 in 2015.
According to TRAFFIC data, Africa-wide Rhino poaching totals reached 1,299 animals in 2014. The latest figure from South Africa means the continent-wide total in 2015 was at least 1,305. “For Africa as a whole, this is the worst year in decades for Rhino poaching,” said Tom Milliken, TRAFFIC’s Rhino Expert. “The poaching epicentre has spread to neighbouring Namibia and Zimbabwe, but is nowhere near being extinguished in South Africa: despite some commendable efforts being made, we’re still a very long way from seeing the light at the end of this very dark tunnel.” Of the four major Rhino range States, only Kenya is expected to report a significant fall in Rhino poaching in 2015.
LATEST NEWS – UPDATE ON THE SAGA AROUND THE LEGALISATION OF RHINO HORN TRADE
A South African judge on 20 January upheld a decision by a lower court to lift the government’s ban on domestic trading of Rhino horns. The decision has raised fears among conservation activists that it could undermine efforts to end Rhino poaching, which is at record levels in South Africa.
“Reopening South Africa’s national Rhino trade will make it even harder for already overstretched law enforcement agents to tackle record Rhino poaching,” the World Wide Fund (WWF) said in a statement. Game breeders John Hume and Johan Kruger won a judgement last November that lifted the moratorium against domestic trading, which has been in place since 2009. They argued that the government’s ban violated their constitutional rights to sell the horn. Hume claimed that the ban exacerbated poaching and, with it in place, he would’ve had to get rid of his 1,200 farmed Rhinos.
The government’s appeal of that decision was rejected by the North Gauteng High Court. South Africa is currently home to 20,000 Rhinos, about 80% of the world’s Rhino population. This population has been the target of a significant uptick in poaching: a 9,000% rise between 2007 and 2014, according to data from WWF. Efforts to combat the trend have included anti-poaching units, drones, dehorning, relocation of herds, and even anti-poaching dogs who can rappel from helicopters.
It is unclear who Hume and other Rhino herders, will be able to sell the horns to. There is little demand for them in South Africa. Most of the demand for Rhino horns comes from Asia, where the belief in their medicinal power makes them a pricey commodity worth up to $75,000 per kilogram. In Vietnam, Rhino horn can fetch up to $100,000 per kilogram, due to the myth that ingesting the horn can cure cancer. A ban in international trade in Rhino horns has been in place under the Convention on International Trade in Endangered Species (CITES) since the 1970s, and activists say the only way to sell it is through illegal channels. “It is inconceivable that anyone would buy it—unless they intend to sell it abroad illegally or they are speculating that international trade will be legalized,” WWF said in their statement.
South Africa will host the next CITES conference in Johannesburg later this year, and has said it would like to discuss whether lifting the international ban might help curb Rhino poaching. With only 29,000 Rhinos left in the world, conservationists are saying the decision to restart domestic trade will only accelerate the Rhino’s march towards extinction.