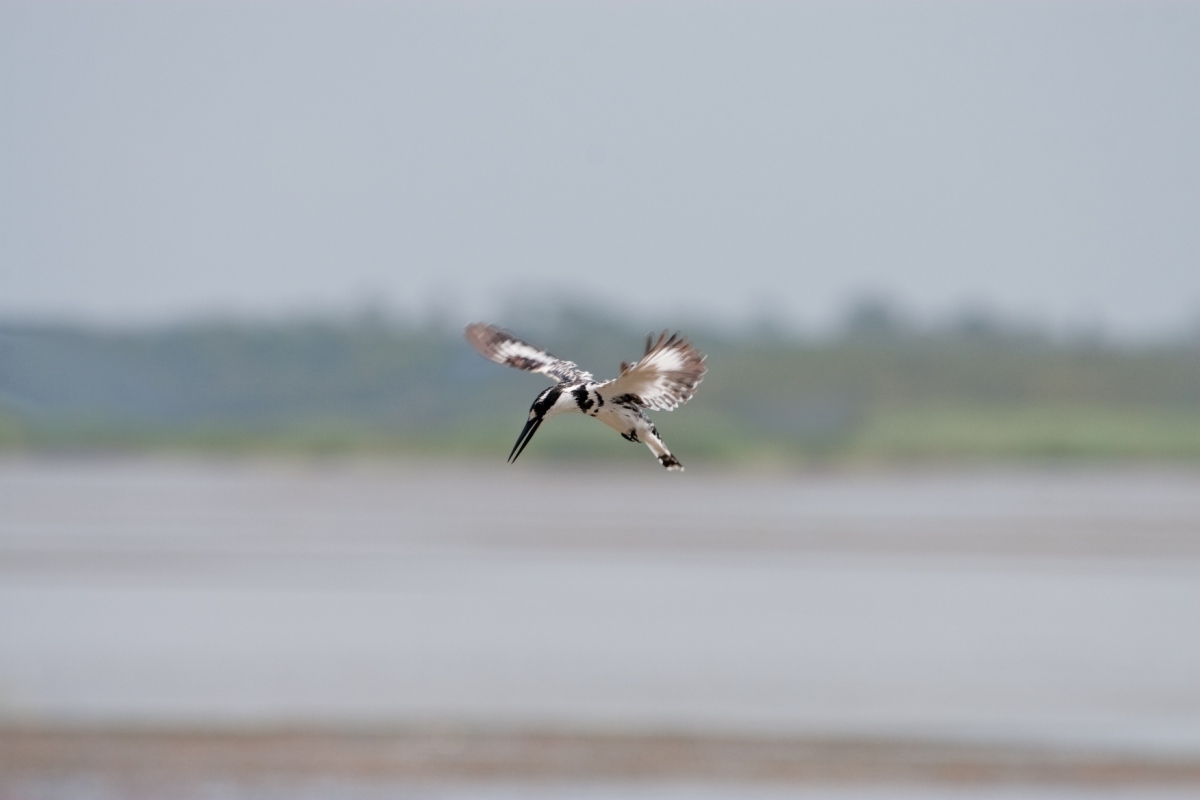 The R10 million contract with Cyclone Engineering Projects (Pty) Ltd is the culmination of five years’ work by iSimangaliso and Ezemvelo KZN Wildlife. Cyclone Engineering will be removing some 100 000 m3 of dredge spoil (sand, silt and vegetation) that was placed in the natural course of the uMfolozi River impeding its flow into Lake St Lucia. With the support of the Global Environmental Facility (GEF) and World Bank, a further R20 million has been allocated by iSimangaliso to continue the work of restoring Africa’s largest estuarine system.

“This is a landmark moment that will stand alongside the day in 1996 when former president Mandela and his cabinet saved Lake St Lucia from dune mining. This marks the beginning of nature’s renewal and a return to wholeness for the Lake St Lucia system,” said iSimangaliso CEO Andrew Zaloumis, on signing an agreement with Cyclone Engineering’s Gerrit van Ryssen. Above, from left: Gerrit van Ryssen, Andrew Zaloumis, Bronwyn James (iSimangaliso GEF Project Manager), Nicolette Forbes (Estuarine Ecologist, Marine and Estuarine Research)

The uMfolozi floodplain was modified in the 1900s for sugarcane farming. This modification comprised inter alia the canalisation of the uMfolozi River and the clearing of indigenous wetlands. This raised red flags about the possible impacts of silt/sediment on the estuarine system – the vegetation that ordinarily acted as a filter for the water was no longer. To mitigate this risk to the system, measures were taken to partially separate the uMfolozi River from the St Lucia Estuary in 1952 by depositing dredge spoil in the natural course of the river impeding its flow to the St Lucia Estuary and artificially breaching the uMfolozi River into the sea at the south near Maphelane to prevent its natural northward migration.

Dredge spoil was deposited there on and off until early 2000. This significantly reduced freshwater to Lake St Lucia from the uMfolozi River, the largest of the five rivers entering the system. It also interfered with nature’s ability to regulate the opening and the closing of the estuary mouth.

The mouth of the Lake St Lucia system in 1937 (left) and 2013 (right). The 2013 photograph shows the dredge spoil pile that was placed in the river course from the 1950s for a period to try and separate the uMfolozi River from Lake St Lucia. The yellow boundary shows the first portion of dredge spoil that will be removed by Cyclone Engineering (Pty) Ltd. The equipment, adapted for salt water use, will be on site in May.

Today the impacts of this approach are still evident. With current rainfall levels the lowest in 65 years, the Lake system has compartmentalised. Presently, only some 30% of the Lake’s surface area has water and species recovery is slow.

The dramatic events during the drought of 2002-2012 brought this management approach into question. The Lake had 10% coverage and species died out as a result of the high salinity levels. The Tugela Bank prawn fishery collapsed and other fisheries suffered heavy losses. Natural resources available for subsistence use decreased significantly and tourism was negatively impacted.

Innovative research by independent researchers from a range of disciplines was pulled together under the auspices of the newly established iSimangaliso Wetland Park Authority. In 2010, a multi-disciplinary research team was contracted by iSimangaliso with support of the Global Environmental Facility (GEF) and the World Bank to find solutions for the hydrological problems facing the Lake St Lucia system.

The new research debunked the myth that siltation and sediments were a problem for the Lake St Lucia system. Silt is an important component of the estuary benthos – the life-giving organisms that inhabit the bed of the estuary and provide nutrition for, inter alia, fish. It also concluded that the uMfolozi River is a significant contributor of freshwater to the St Lucia estuary, and, importantly, is the powerhouse that drives the mouth dynamics.

The study strongly recommended that nature should be left to its own devices and the uMfolozi should be allowed to pursue its natural path northwards. This would allow the uMfolozi to once again take its rightful place as the contributor of some 60% of the Lake’s freshwater.

And so in 2011/12, iSimangaliso with Ezemvelo KZN Wildlife launched its publicly consulted management strategy for the Lake St Lucia Estuary: minimum interference, no artificial breaching and the re-establishment of the natural river course. The first intervention in the implementation of this strategy, frequently referred to as the spillway, was completed in 2012. It entailed the removal of small quantities of dredge spoil to facilitate the flow of the uMfolozi River into the estuary along its natural course. This was no more than the river had been pursuing of its own accord when it pushed through the dredge spoil on the beach in 1999 and 2007, breaching to the sea, far north of the popular St Lucia Ski Boat Club. 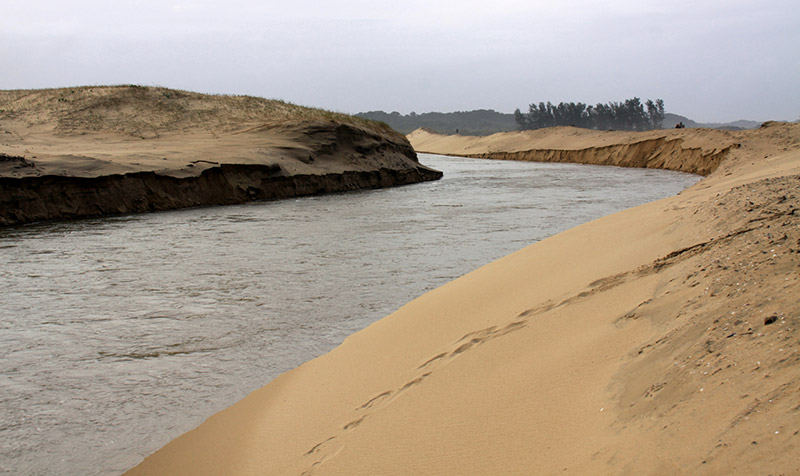 The world recognised the uniqueness of Lake St Lucia, when it said there “is no other place like this on the globe” and accorded it the privilege of World Heritage status. Lake St Lucia is the world’s oldest protected estuary. It was first proclaimed in 1895. It was also recognised as a wetland of international significance and made a Ramsar site in 1986. It is Africa’s largest estuarine lake and comprises over 60% of South Africa’s estuarine area and 90% of its protected estuarine area. It is one of five coastal estuaries in South Africa.

South Africa is a water scarce country and finds itself in one of the worst droughts in living memory. Innovation is key to conserving and managing our water resources. The struggle to save Lake St Lucia is central to this issue. Estuaries, with their surrounding wetlands, comprise some of the most productive yet threatened eco-systems in the world. They are important in the moderation of global climatic conditions, naturally improve water quality, and provide important economic and recreational opportunities. They form a vital link between marine, aquatic and terrestrial eco-systems.

The Lake St Lucia estuarine system supports high levels of biodiversity and viable populations of threatened species, which are of international and national importance, including feeding and breeding areas for endangered and endemic species. It is the most important nursery ground for juvenile marine fish and prawns along the KwaZulu-Natal coast. More than 50% of all water birds in KwaZulu-Natal feed, roost and nest in this estuary. Importantly it is a breeding area for several birds, which are rare or have limited distributions in South Africa. The Lake St Lucia estuarine system is one of the most important protected areas for the conservation of the Nile crocodile in South Africa. The hippopotamus is an iconic animal for Lake St Lucia. Listed as ‘Vulnerable’ on the IUCN Red List, Lake St Lucia is recognised as having the largest viable population in South Africa. The contribution to fisheries of the Lake St Lucia system is also significant. Seventy-one of the 155 fish species that have been recorded in the St Lucia estuarine system use it as a nursery.

The health of the St Lucia ecosystem is directly linked to the livelihoods of people in the area. The Park is situated in the uMkhanyakude District Municipality, one of the poorest and most underdeveloped local authorities in South Africa. Over 80% of households live below the poverty line and only about 16,5% of the population is formally employed. Some 80 000 people living in 15 000 households within 15km of the Lake St Lucia estuarine system and use the system extensively. Harvests of raw materials, particularly estuarine sedges, are estimated to be worth around R7,5 million a year.

Tourism related to the Lake St Lucia estuary area employs an estimated 1291 direct full-time equivalent jobs and 6924 indirect jobs. There are about 510 000 visitors to the study area per annum, of whom 42% are foreign visitors, who spend R46 million on an estimated 157 000 tourism activities from local operators.